A post anniversary party work day, surprisingly with fresh and alert farmies. Who seemed invigorated by the previous evenings celebration and enthusiastic to work.

The right hand side of the farm is composed of four livestock pens which are normally used for pigs. The first pen is separated from the rest by a thin strip where we had our asparagus raised beds. Those of you following these posts will know that we’ve recently moved the asparagus to another part of the farm - in readiness for this.

When this site was aquired for the farm it was totally overgrown from the entrance gate upwards, and the team have been developing the site over the years and making their way further up the plot. So like the penthouse, greenhouses, sheds and asparagus these things were placed in the space that was available at the time.

The issue that we’re trying to address with our cunning plan is pig loading! The top three pens are all joined and pigs can be loaded onto the trailer by using a thin corridor in the second pen, but the gate here faces downhill making it awkward to align the trailer. The lower pen has a gate on a peculiar corner, which points diagonally uphill, also making trailer alignment tricky. Nor does the lower pen benefit from the thin corridor of the other pens which is very useful when trying to herd pigs. 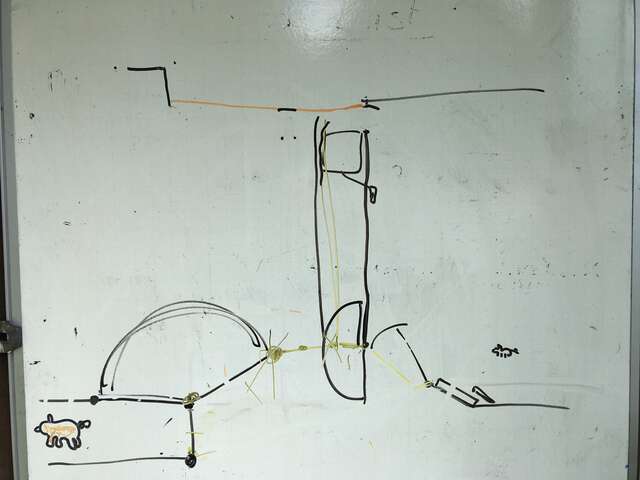 This is the plan for the new pig loading area, note fully grown pig in the lower left and piglet on the right.

The plan therefore is to use the strip between the pens, which is level (ish) and easy to align the trailer, join it to the first and second pens, and in addition create a thin strip to direct them towards their waiting transport. 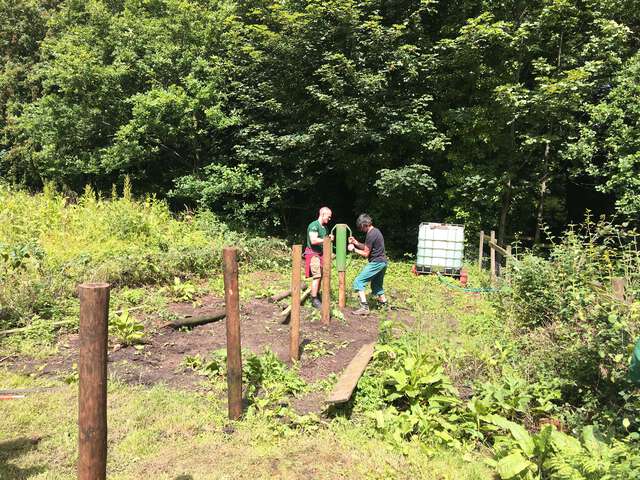 Warren and Andy putting the plan into action

We removed the lower edge of the fence around the second pen (it was falling down anyway) and moved it closer to the top of the first pen, creating that corridor which makes directing the piggies easier.

Usually when we have a plan we discuss (argue ;-) about it for ages, agree something, and then when it comes to doing it we don’t often follow the plan. This time we managed to stick more-or-less to the agreed plan and although only partially complete the new arrangement was already been used to load a batch of pigs. The report was that loading was easy (it usually involves chasing pigs around a field for an hour) and the animals remained calm and were no trouble - exactly what we wanted.

OK, running for cover has nothing to do with the cunning plan, simply the weather that day swung from bright, hot sunshine to a deluges and back again, requiring a couple of dashes for shelter which fortunately didn’t last long. 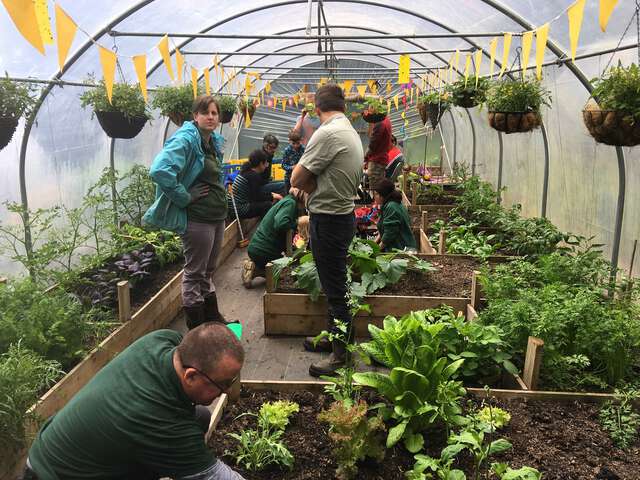 Crowded polytunnel as the heavens opened.

James and Amelia worked quite enthusiastically to dig a short drainage channel and lay some slabs in front of the pigglets feed trough, as that area was in a slight dip which would fill with rainwater and turn quite revolting. 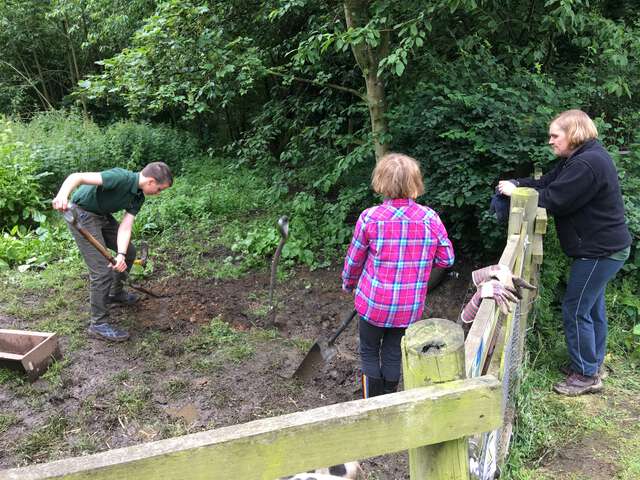 James joined the B-Team to do a beehive inspection and came away with a beautiful section of honeycomb. It’s a shame to remove it, but in order for us to harvest the honey it’s better if the bees build the combs on the frames that we provide them. This one had very little honey in it so it was a good time to get rid of it. 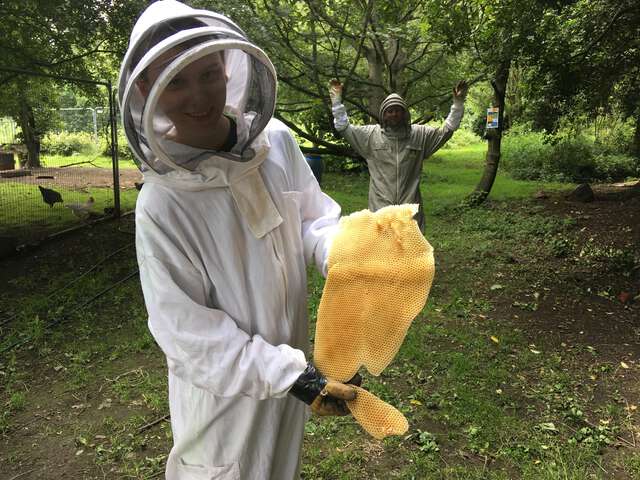 A big slab of freeform honeycomb, which we removed from one of the hives 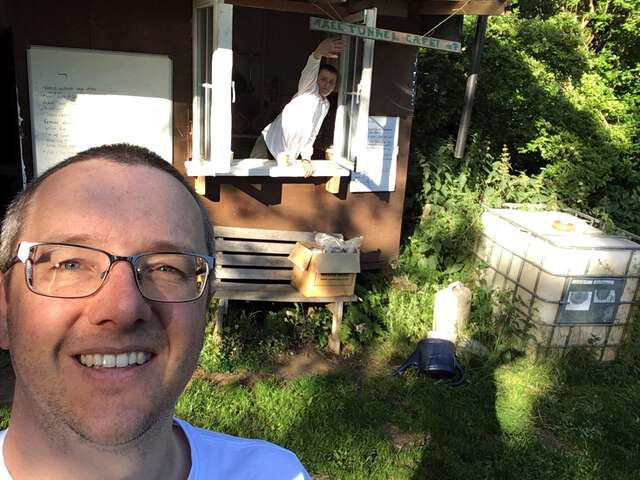 James and I did a mid week feed, the weather was great, James suggested stopping for hot chocolate (him) and coffee (me) - he made the drinks. Why not enjoy the farm even when doing the chores!

Roundhouse has many uses

We’ve strung some onions and garlic up in the roundhouse to dry which is important if they’re to last. It’s great that the roundhouse has so many uses! 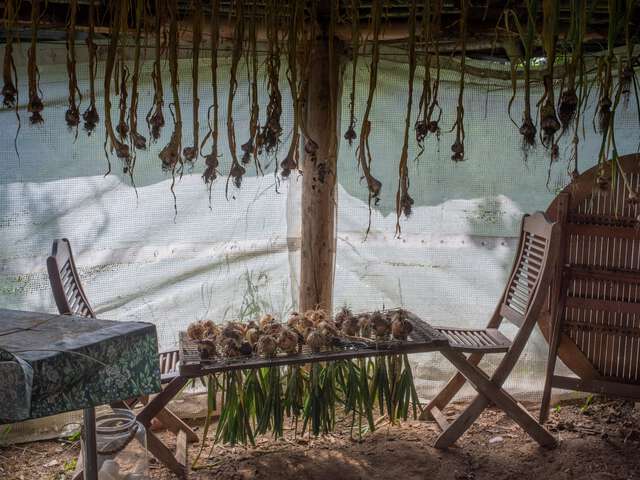 Drying onions and garlic in the roundhouse. 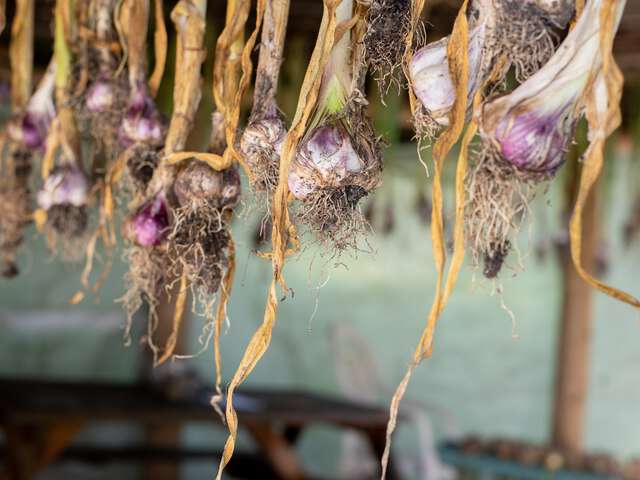 Garlic hanging to dry in the roundhouse. 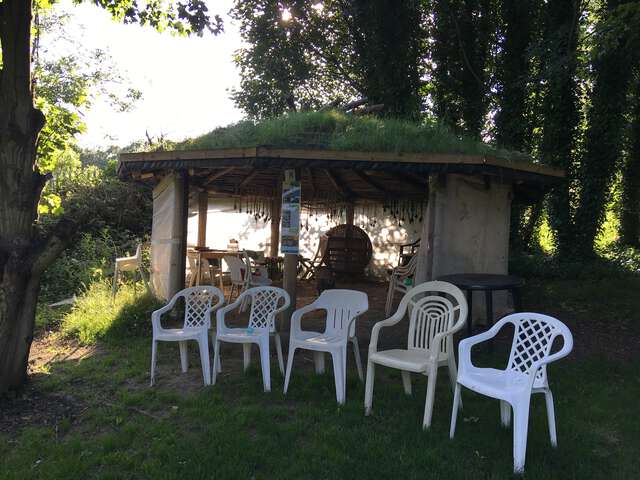 Dusk at the roundhouse.